I travelled around Myanmar for 25 days in August 2016. In this article I try to highlight the best places to visit and give tips how to make your trip to Burma even better.

Myanmar is a controversial country. It’s one of the least developed countries in South-East Asia but it also offers high class western luxuries if the money is not an issue. It’s developing super fast at the moment so I really recommend visiting there as soon as possible to get the authentic feeling of what kind of place it used to be before capitalism took over big time. According to locals the big tourist boom started in 2011 and every year more and more people are flying in which eventually will lead to more and more hotels and also more hustling. Of course in all South-East Asian countries tourists are considered as walking wallets and easy cash, but Myanmar really seems to be more relaxed in that sense and the amount of hustling was pretty low compared to Thailand and Cambodia for example. It also seemed like a really safe country, probably because of infamous and rough punishments for crimes against tourists. That is also the reason why you shouldn’t report anyone to police if you are not 110% sure that the person was in charge of the crime for he will be probably tortured and locked away for good. 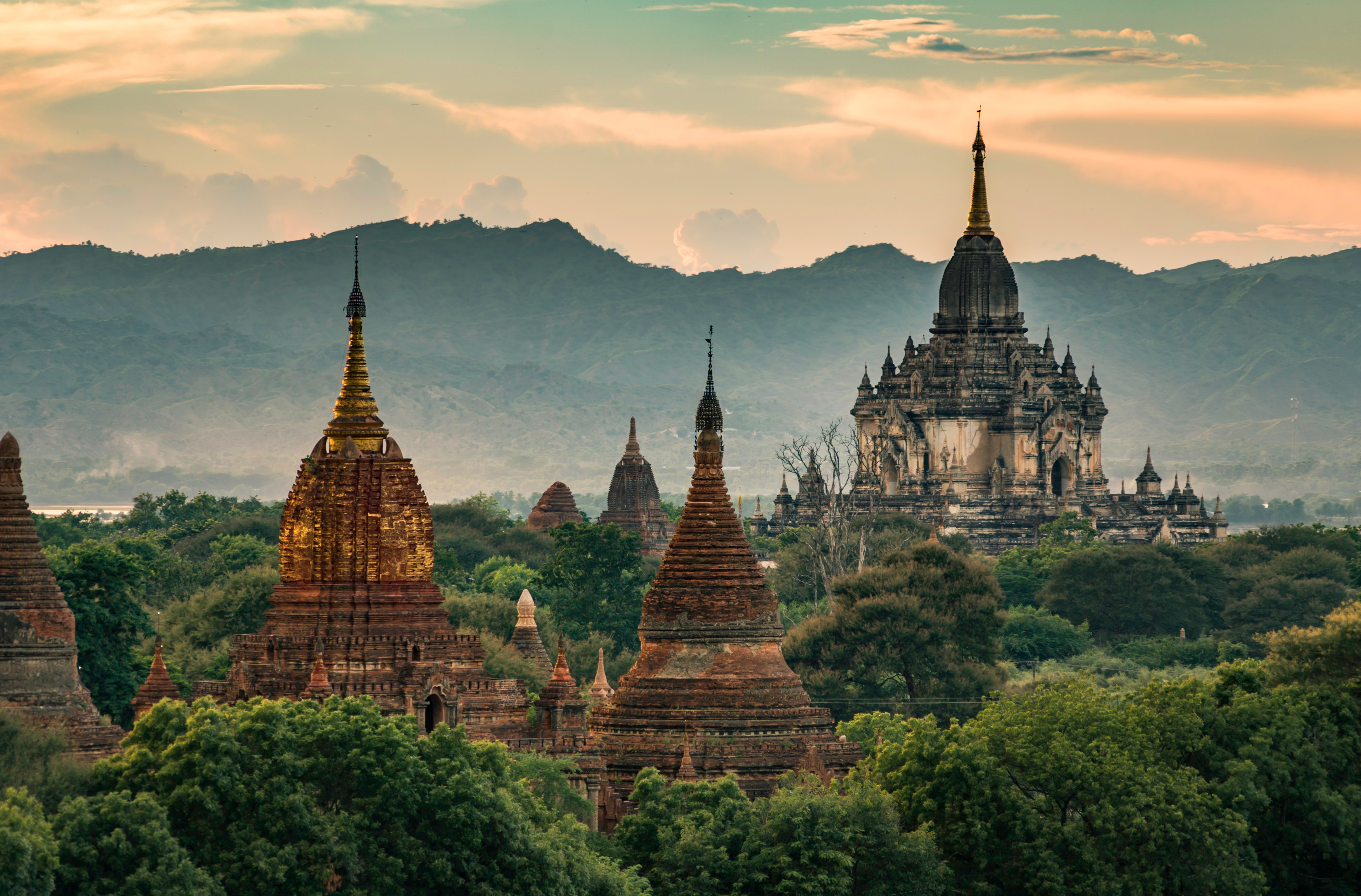 Bagan temples in sunset. The biggest one in the back is Thatbyinnyu.

Moving around the country

Tourism in Myanmar is still highly regulated and it’s literally impossible to travel independently where you like because of the lack of infrastructure and the fact that hotels and locals won’t accommodate you in some areas because it’s illegal. The best way to travel Myanmar is to catch local overnight bus which are usually pretty crowded and noisy though. Roads are also pretty bumpy and occasionally in bad shape. The bus rides are also extremely slow so fix some snack on the way. Water is usually offered for free during rides. The good thing about busses is that they usually have electrical sockets to charge electronics but the Wifi they might advertise won’t obviously ever work. The best way to book busses is local travel agencies who obviously charge a couple of extra euros but then you’ll know for sure where they are heading to. Other option (if you know the route and operating companies) is to book directly online using Facebook messaging. They will ask for your passport details, name and contact information but that’s completely normal procedure so don’t get paranoid over identity theft. You will pay them when you get to the bus. Almost all the bus companies from Yangon operate from Aung Mingalar Highway Bus Station about 30 km north of downtown Yangon. A taxi there will take almost two hours in rush hour (check your guesthouse for more details) so be sure to have enough time for transportation.

“I really recommend visiting there as soon as possible to get the authentic feeling of what kind of place it used to be before capitalism took over big time.” Myanmar is also notoriously famous for low standards of hygienics so make sure that you won’t order any salads from dodgy looking shacks and always get everything either boiled or fried. I wouldn’t order any sushi either at least inland. Also roadside buffets might be an issue on longer trips and we saw even locals getting sick, so be careful. There are no toilets on busses and a short toilet break is usually every 3-4 hours so it’ll be one shitty 15 hour ride if you get your stomach badly fucked up. 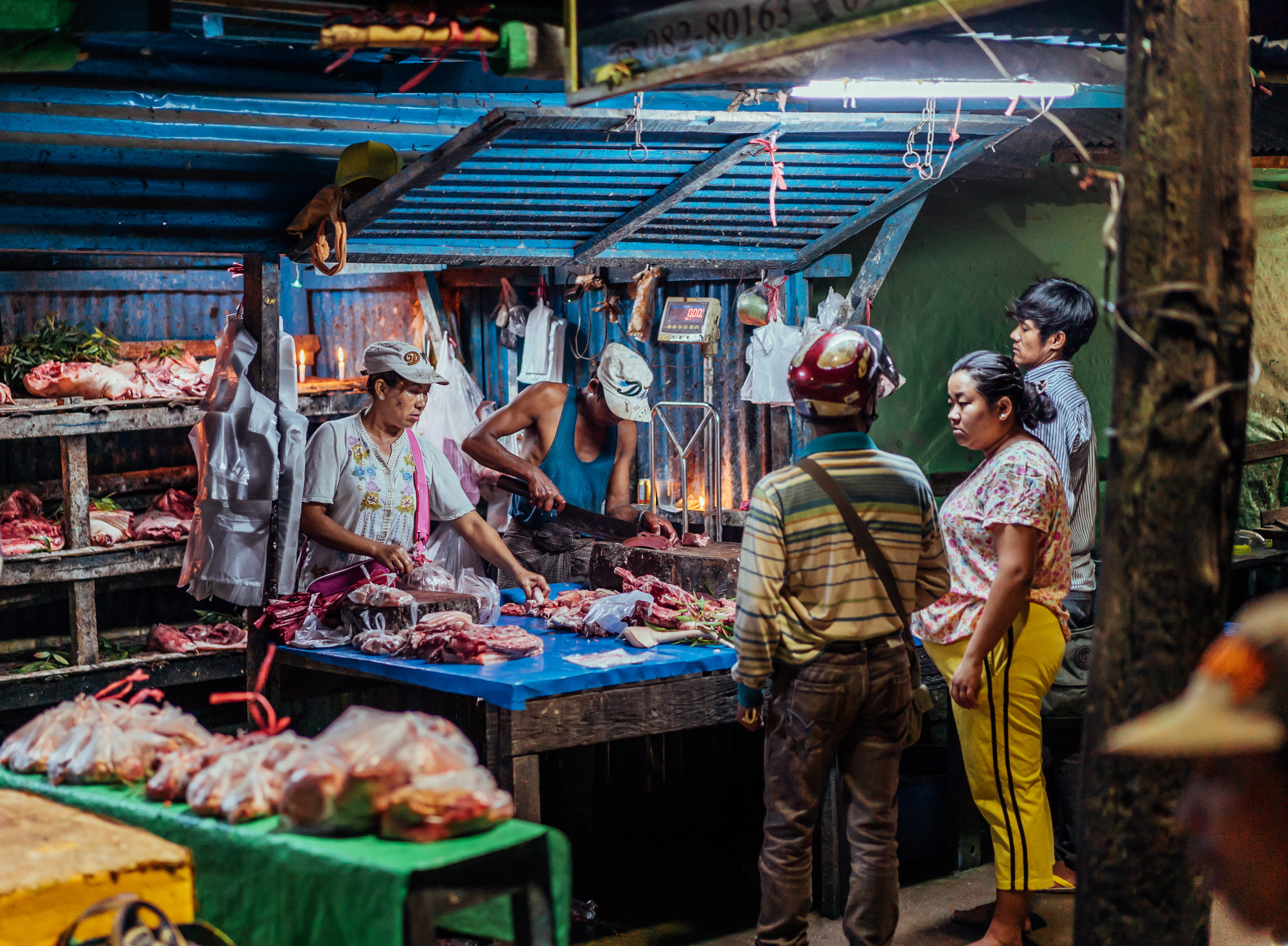 And yes, one more thing. It’s literally almost impossible to find reasonably priced (or any) western standards sunscreen from Myanmar so bring your own.

Here is a short overview of the places and cities we visited during our 25 day trip:

Yangon is the biggest city of Myanmar and very probably the place you are flying to. Definitely worth seeing and has really interesting areas to visit. However the suburbs as much as we saw them, have really nothing special compared to all the other South-East Asian cities in overall.

The best areas and places to visit in Yangon are: 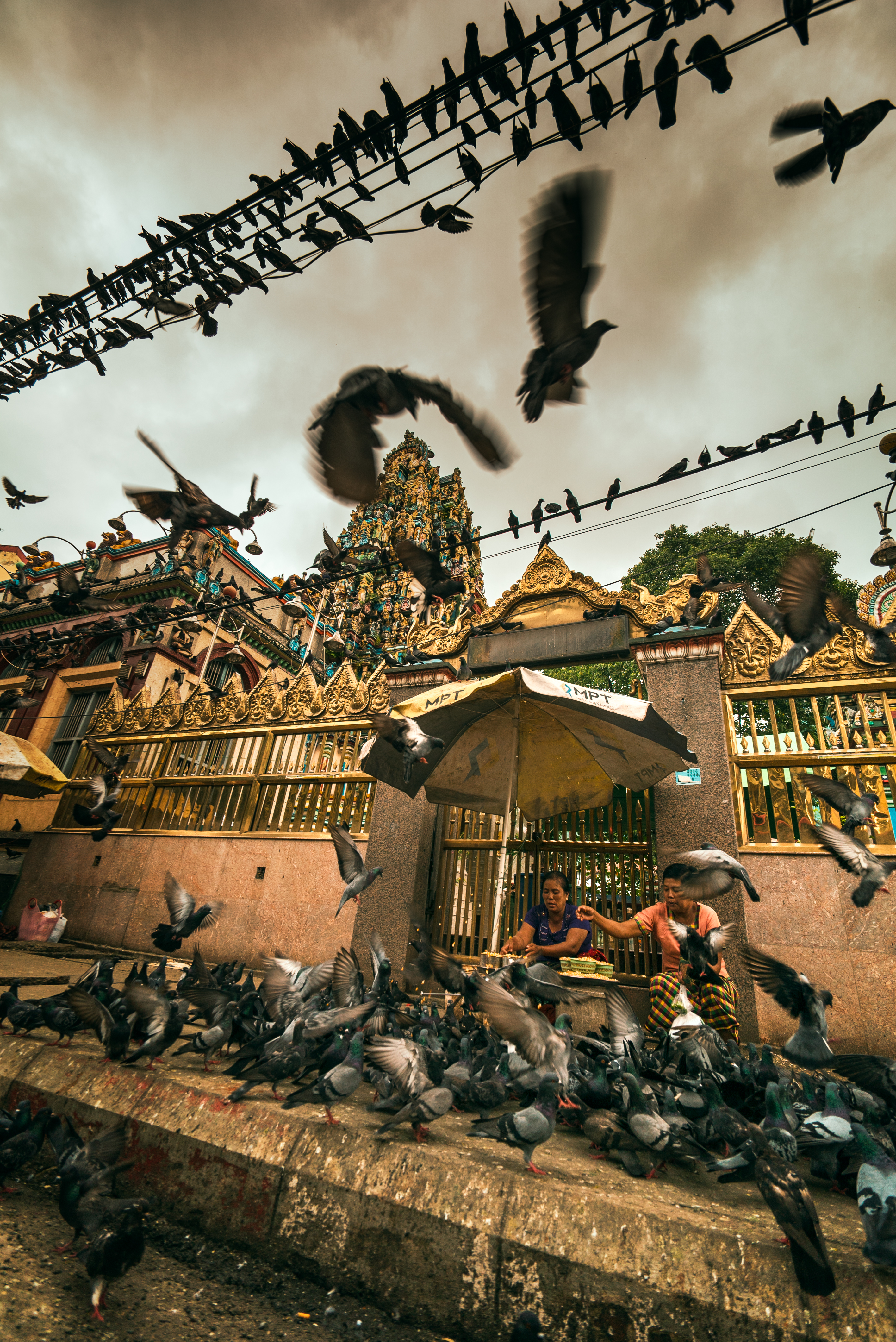 One of the greatest ancient temple cities in the world, Bagan was pretty severely damaged 24th august 2016 in 6.8 richter earthquake. We visited the site three weeks later and here is a report how the place looks now, which temples are OK and which are more badly damaged and where to get the best photos at the moment.

I talked with a local guy who was working in Bagan temple maintenance crew. According to him there was a similar earthquake in 1975 which destroyed and damaged temples severely as well. Those damages were repaired in 3 years. At the moment according to him it seems that current restoration projects will take approximately two to three years to complete so Bagan will probably not look the as it used to until autumn 2018.

The worst affected temples were Sulamani and Myauk Guni (North Guni). Visitors have now restricted access to 33 temples. Sulamani was one of the biggest and most beautiful ones and it’s destruction is a big shame. 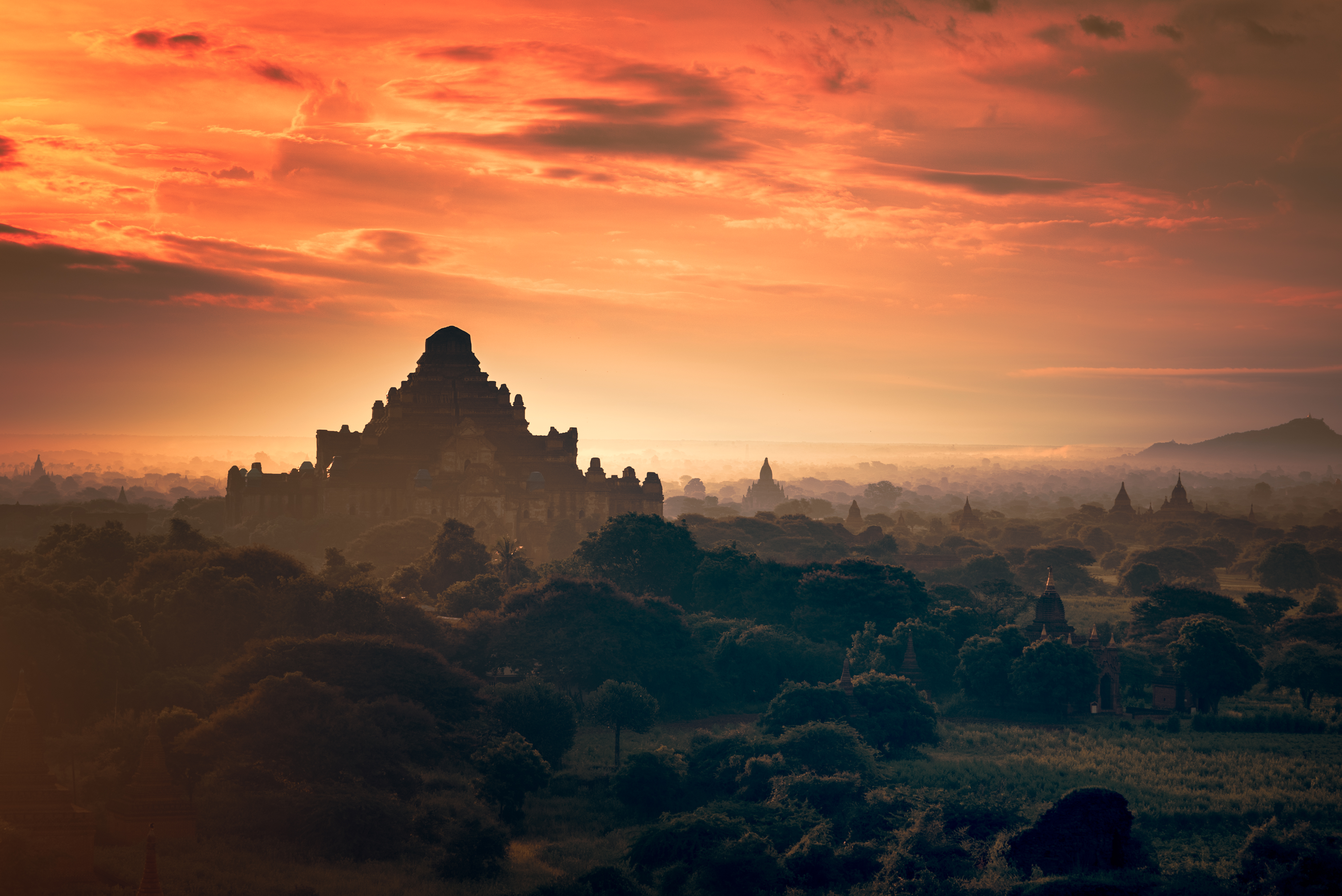 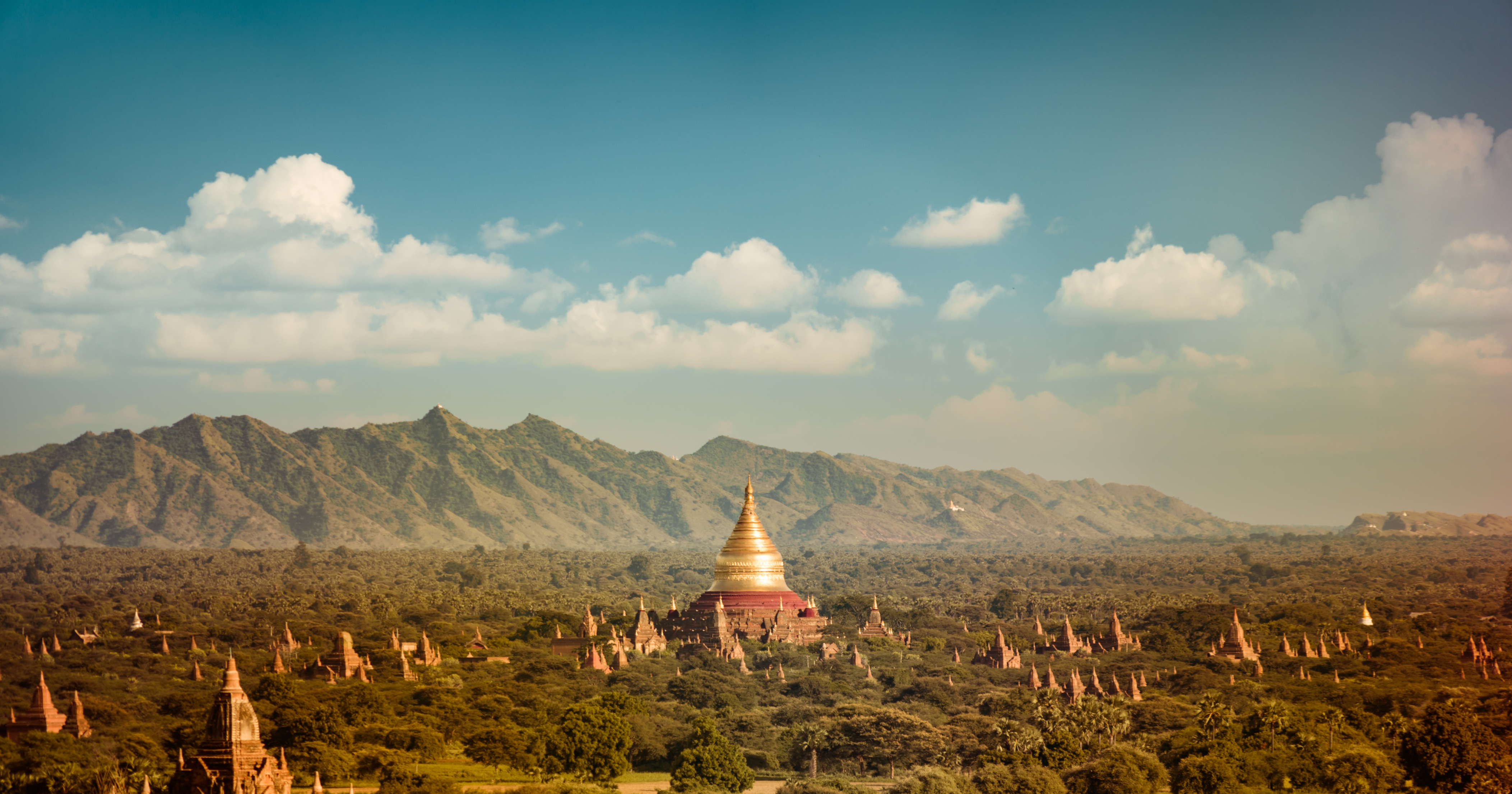 The best temples to visit in Bagan after 2016 earthquake:

Shwesandaw is probably the most famous for sunrises but also works good for the sunsets at the moment. Unfortunately many people think the same BUT it’s not as crowded as Phy Tha Da which was even more crowded around sunset.

Htilominio was one of the least damaged temples during 2016 earthquake. There is a nice climbable building on south-west side right next to the temple where you can see the whole Htilominio from a really nice angle. Probably would make a good sunrise as well.

One of the least known climbable buildings is Oak Kyaung Gyi which is located near Htilominio temple. With telephoto lens you can get amazing sunset photos towards Ananda temple. This place is very recommended because it’s not crowded and the view is nice.

It’s the big golden temple which you can see from the distance looking south from the top of the Shwesandaw temple. If you have eBike it’s a nice ride there and it’s less crowded than others. There are also climbable buildings south of the temple where you can have nice views and less tourists.

Good place to stay in Bagan:

The best area (and least expensive) to stay is Nyaung-U in North-East of the temple area. Even though it lacks soul the quality of Motel Zein is excellent and the young manager Ei speaks perfect English.

Inle lake is one of the must see destinations in Myanmar even though it is quite touristy. Boat ride around the lake is highly recommended, but try to negotiate what you want to see and settle down a loose schedule for everything. Also ask to go to see real fishermen who don’t ask money for photographs. 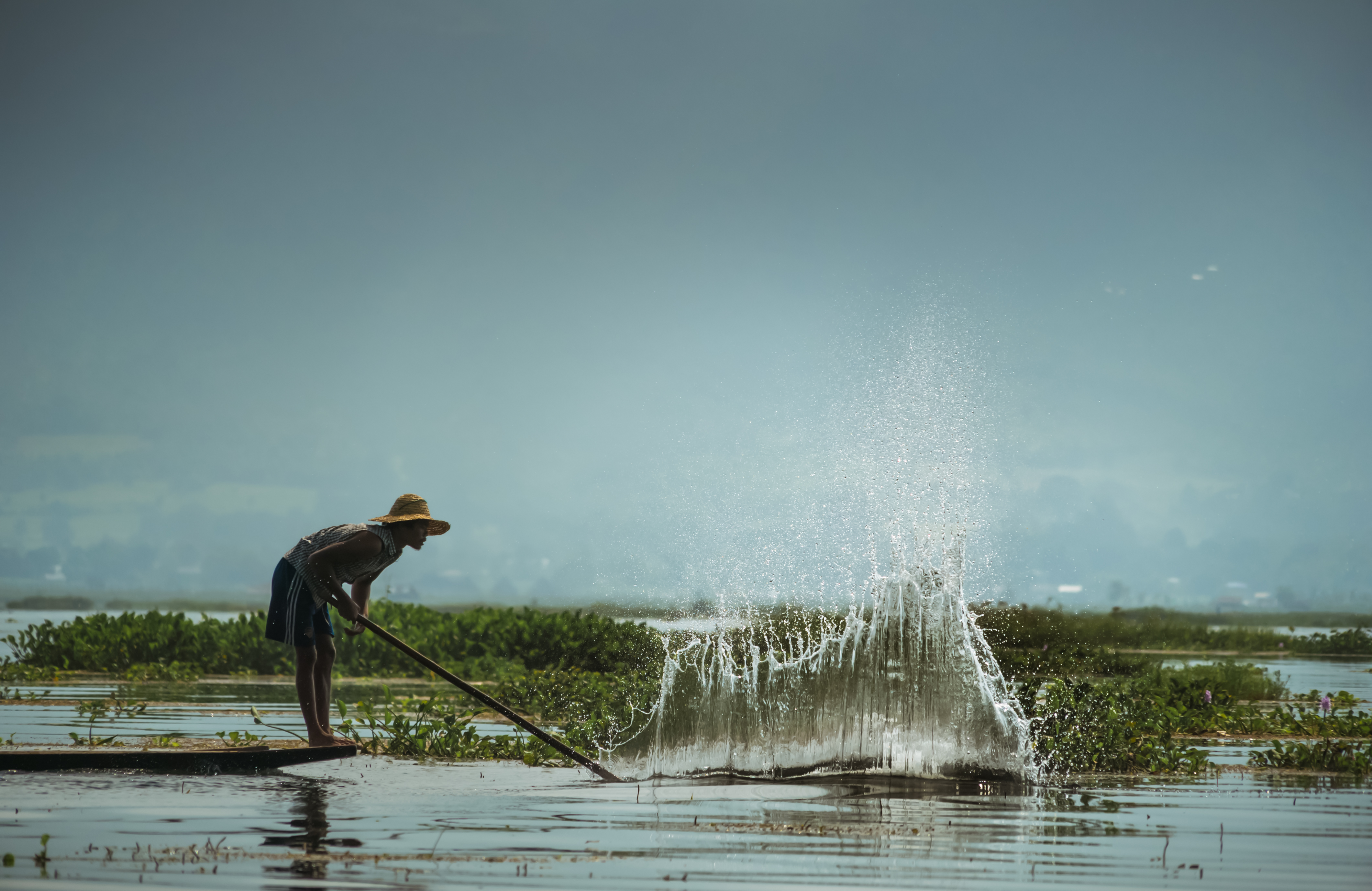 Local fisherman in Inle trying to scare fish to his net. 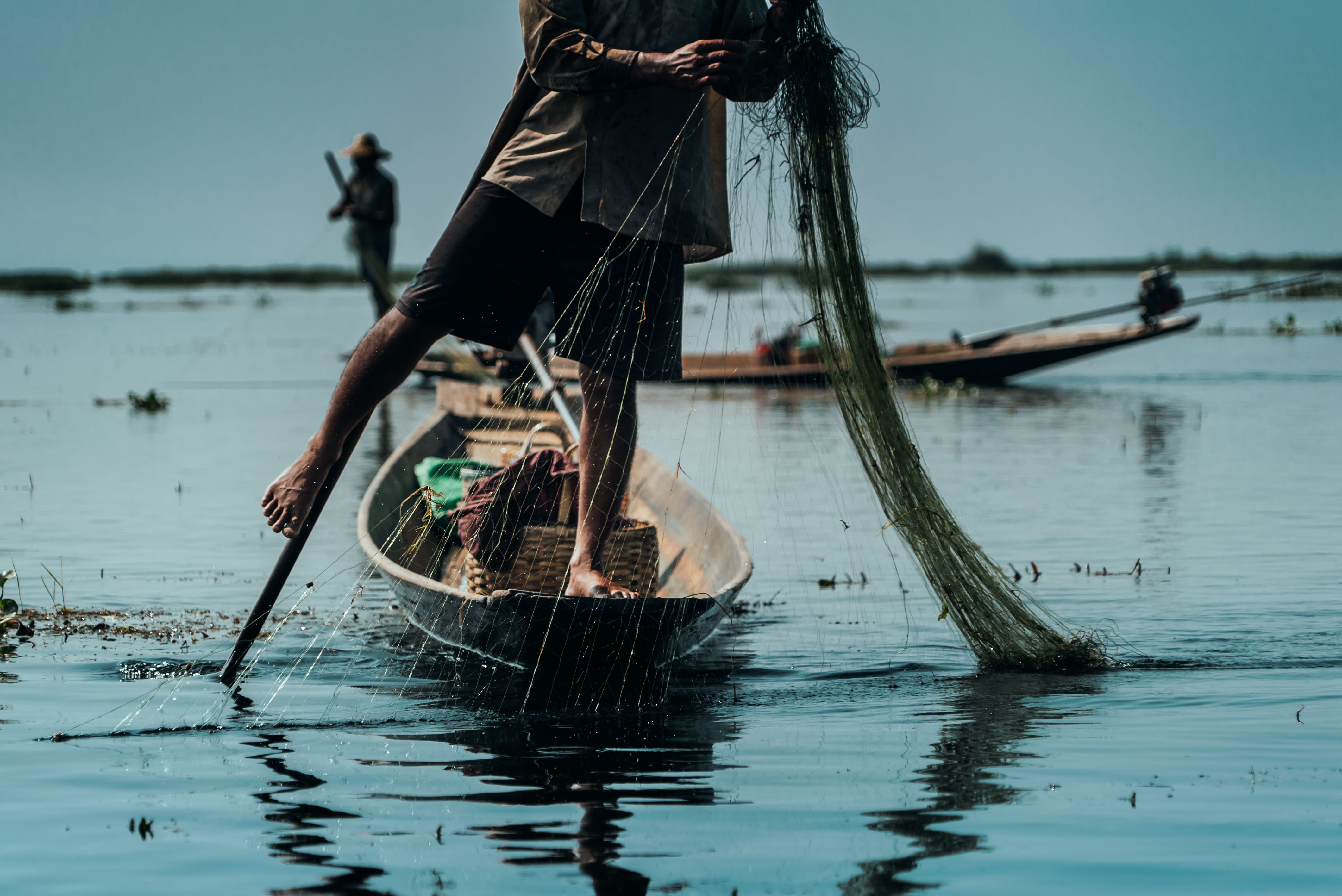 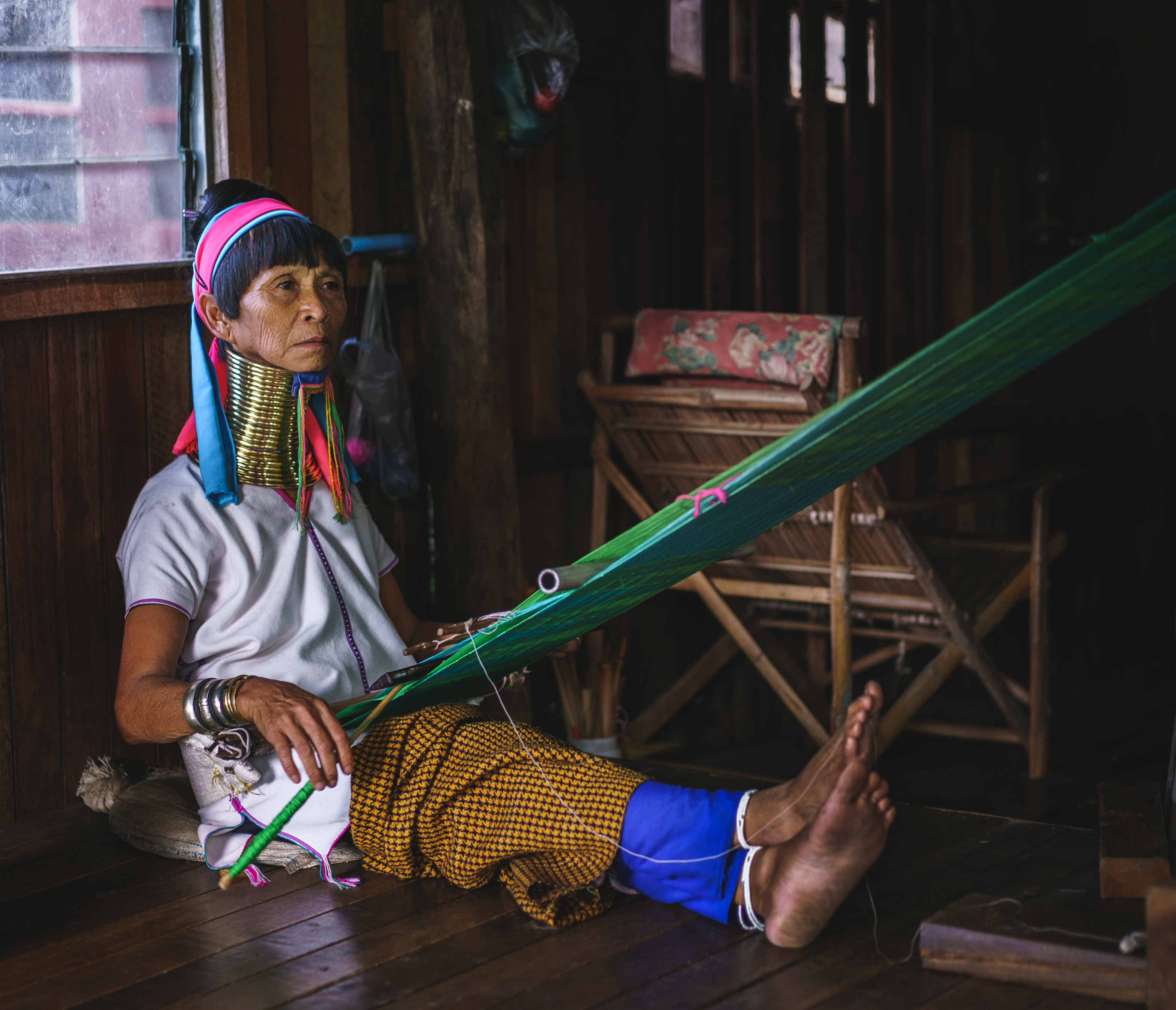 Mawlamyine isn’t really on the tourist track and probably that’s the reason why it seems more interesting than other major cities in Myanmar. It feels authentic and gives excellent possibilities for people watching after sunset when people hang on their porches open to streets. The most famous temple Kyaik Than Lan Pagoda is also a great place to see the sunset and way less crowded than Shwedagon pagoda in Yangon. There are also many monasteries in the area which might be accessible to tourists with permission. The area is simply beautiful and it’s highly recommended to hire a motorbike there to explore the various caves in the area. Also the sunsets are amazing here. At least the ones we saw were absolutely mindblowing. Check out Galaxy Motel for cheap stay in the city. 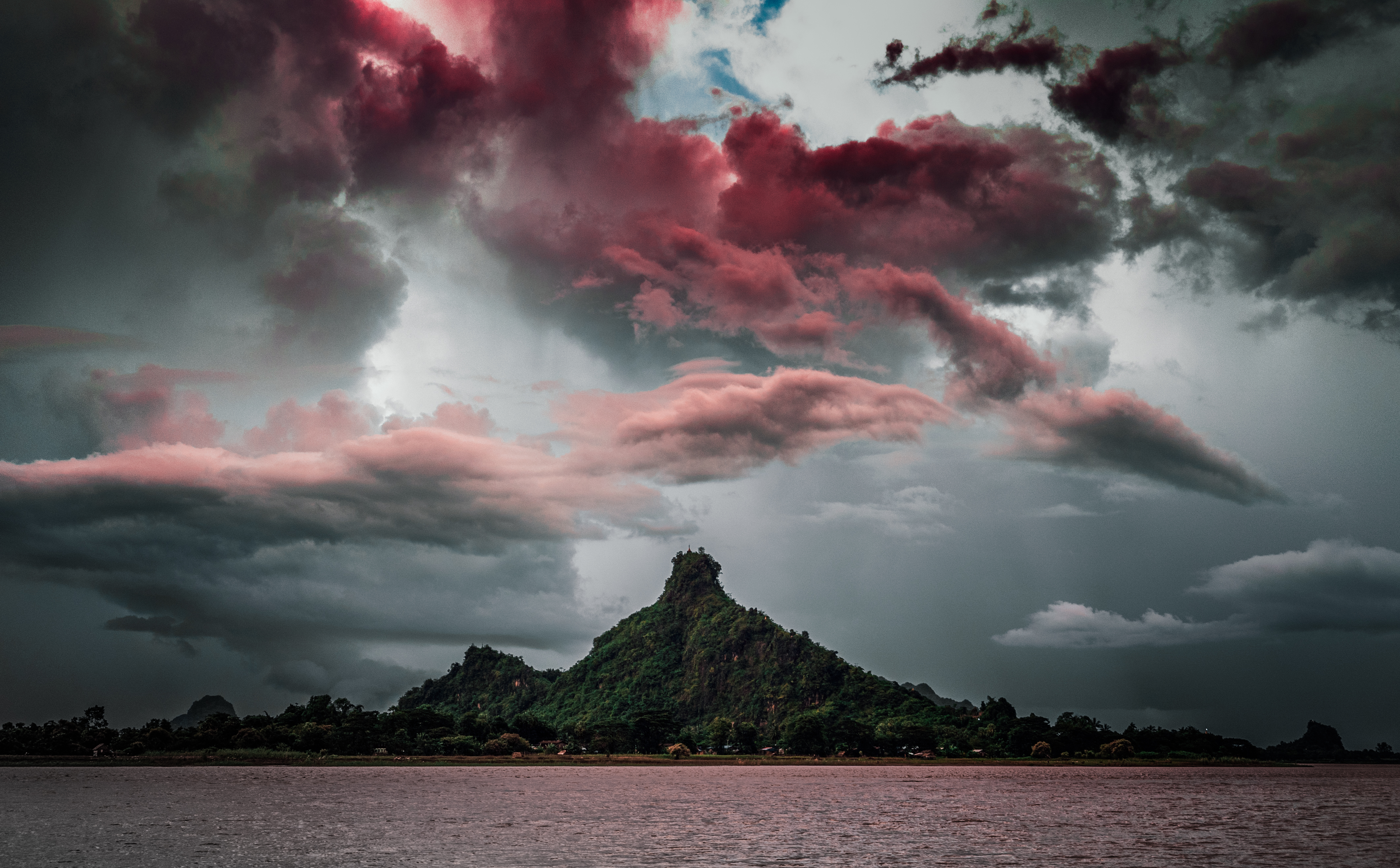 Apocalyptic clouds in Hpa An, Myanmar

The places we didn’t enjoy so much were:

Even though it’s considered as a good place for hiking it wasn’t really spectacular. We’ve had better in many places as well. If you have never hiked in South-East Asia it might be worth the extra trip and two extra days in a bus.

The standard thing to do in Kalaw is to make 2-3 day hike to Inle Lake. What we heard it’s really touristy and more of a agricultural trip than actual hiking. There are tour agencies that take their customers to less beaten areas, but you are likely to march in a line with ten to thirty people. Of course it’s a nice social experience but I don’t consider it as hiking. One day treks around Kalaw are very mediocre and you will have better hiking in many places around South-East Asia. The area is surprisingly developed and people are living in brickhouses like everyone else. Everybody is anyways doing their business in fields or forest so you won’t meet so many people anyways. So if you have a tight schedule I recommend doing something else that is more special in Myanmar. 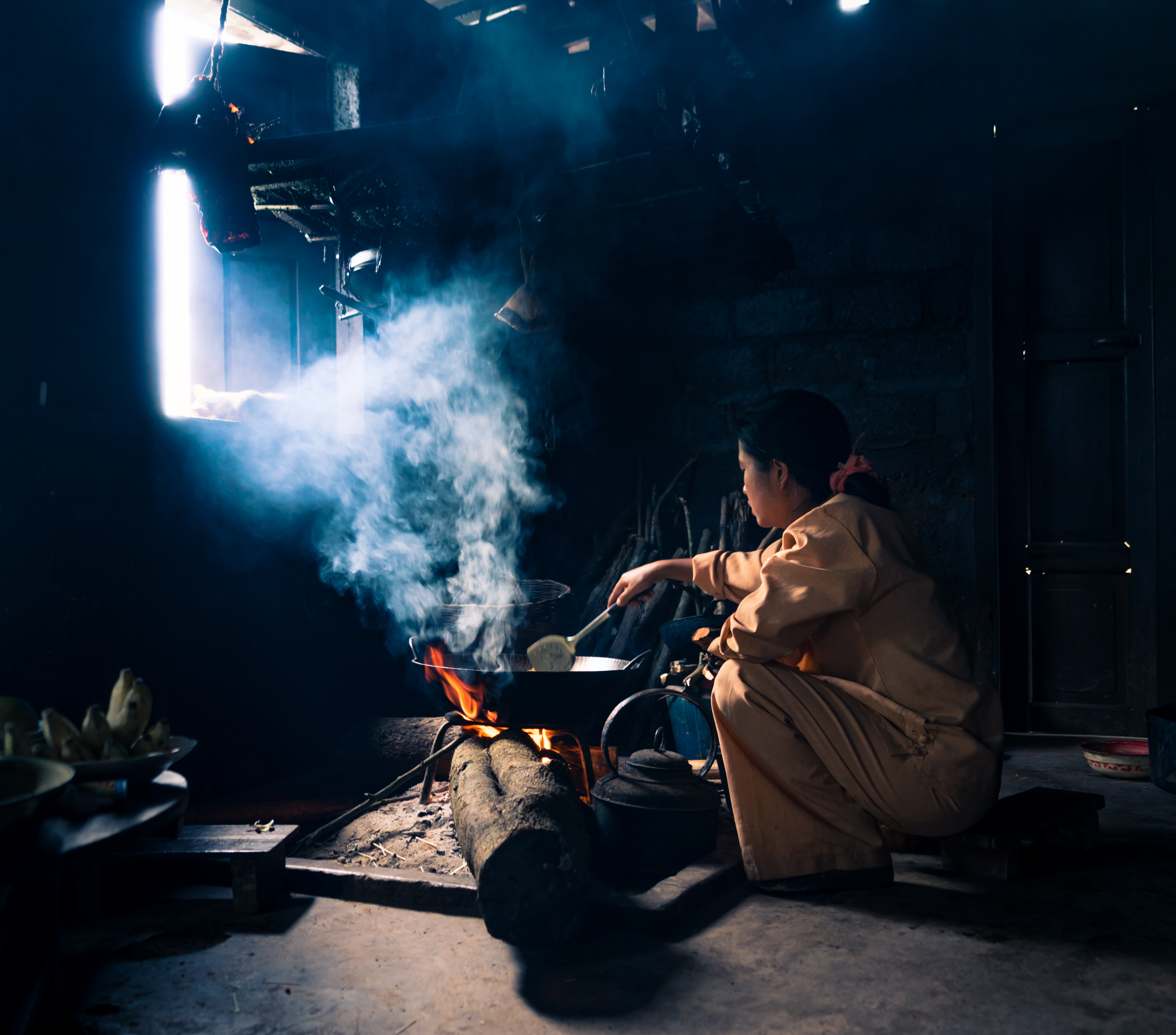 What could be a nice thing to do is to apply for permits to enter more secluded not touristy areas of the country but in order to do that you have to apply for the permits preferably months before the trip. It’s also worth noticing that if you are on a budget the permits can be a bit expensive and if something unexpected happens in the area they will cancel the trip without any compensations. The hill tribes and military government really don’t  go well together and there are conflicts all over the country pretty much all the time. BUT if you manage to get there you’ll probably experience something only few of us had.